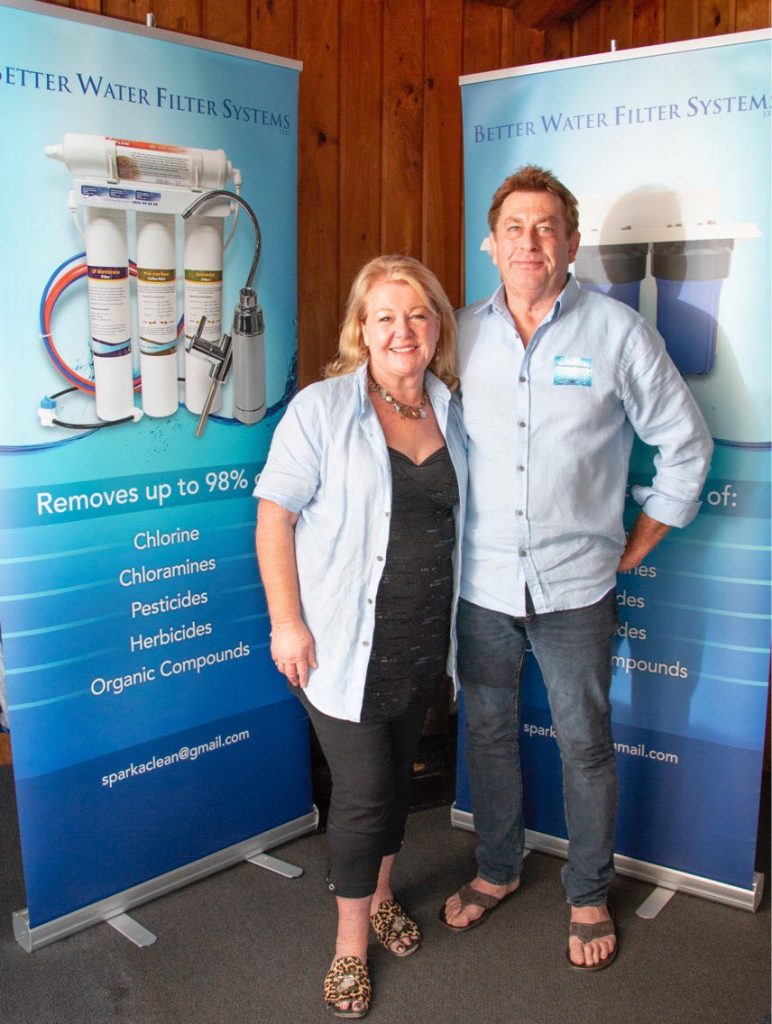 Greg and Gail Woods are at the forefront of solutions to keep our water safe and pure.

It all started with Gail hearing about fluoride and the Government’s agenda through Jonathan Coleman’s members’ bill to Parliament. About two years ago, Gail began searching for ideas to turn around the attitudes of our country’s leaders. She came across and became involved with Mary Byrne of Fluoride Free NZ. She found Mary to be a great lady with undying energy to stop the draconian practices of adding chemicals to our water supplies. This gave Gail the motivation to do more.

Previously, Gail had a good rapport with Dr Alistair Humphrey, Canterbury Medical Officer of Health, through her discussions on fluoridation, with him. However, in January 2018, after the issue of chlorinating the Christchurch water supply was raised in Council, Gail phoned Dr Humphrey on his cell phone to ask: “What about the bottle-fed babies overdosing on Chlorine?” Apparently, he hung up on Gail because she believes he knew that he was sanctioning something that wasn’t right.

Gail was brought to tears thinking of all the babies as well as the sick and elderly and all the people with major and minor problems affected by chlorine. She thought, what can I do to help the people of Christchurch? With the Christchurch City Council having made the decision to chlorinate, under the cloud that the Medical Officer of Health could enforce it, anyway, Gail formed a protest on the 9th February, but it wasn’t supported like it should have been.

Her next step was to find a solution. Greg and Gail teamed up with a microbiologist, Mark Durham who has a Postgraduate Diploma in Public Health and has been in the water industry for over 20 years. From him they learnt about how the chlorine reacts with the organic compounds in the water and how to choose the right types of water filters for home use. It was then that they decided to set up a business to supply the most effective water filters for people’s health.

Things moved quickly, and they managed to book the last stand at the Christchurch Home Show, three days before it opened. They found that the people who came through their stand were very upset about chlorination of the town’s water supply. They were all grateful for the information being supplied through Greg and Gail’s research. The Home Show was a great success because customers were shown the most effective water filter systems for their home.

This is an update on the new water authority. It was set up by David Clark (as he stated National has fallen on the water standards and left people vulnerable). As you know the Labour government under David Clark was set up by the Government but independent from the Government, a bit like an offshore bank account. The new governing authority has 7 CEOs and 150 workers. The new legislation is too pronged. The first piece was passed on 22 July 2020 to remove the Authority from the DHB/The Christchurch City Council, the second piece was to give the water Authority the power to implement the water standards nationwide. Then July 2021 the New Water Authority will roll out its water standards which I have been reassured by my information, will be chlorinated water nationwide.
I know you have all heard that Christchurch has an exception…
Here’s the BUT!!!
The Christchurch City Council has to prove that the water is safe, inclusive of the pipework, which I have been told can’t be promised to happen. As what the earthquake didn’t do, the chlorine destroyed the reticulation system. We all know someone that had their Water Cylinder destroyed by the Chlorine eating away at the components.
The Council acknowledged this when it was proven to them, but was exempted from prosecution due to being enforced by the DHB to chlorinate the drinking water supply, for fear of contaminated water. Think Havelock North 🤥🤥

Now what’s happening is, 27 billion dollars needs spending on our Reticulation System and neither the Council or Government has that kind of money available to fix it, so things will be done as the finance becomes available over the years. How many years? How long is a piece of string? In the meantime chlorine is our protection against sickness?

Did you know the Chlorine doesn’t kill e-coli, which comes from faecal matter? Chlorine is a cheap 112-year-old technology and is easy to supply. Many people have purchased a filter system for their house including us, we have set up our business to provide an alternative to the standard, as drinking and showering in Chlorine is like swimming in polluted rivers, not good.

If you have any other questions, please feel free to contact me and we can chat!
Kind Regards,
Greg & Gail Woods